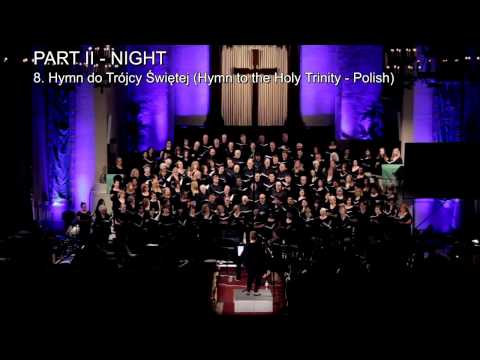 DESCRIPTION: There is plenty of elements in Christopher Tin's albums: it doesn't concern only music (of course, music is what ties all together), but also linguistics (every song is in a different language), literature (every text is an excerpt from a pre-existent text adapted to an original music), philosophy (the cycle structure of albums, their religious/social/poetic content); this is what, in my opinion, makes his work of great artistic and cultural value. I wanted to study his songs, especially their texts, and the best way to do that was to read lyrics and translations simultaneously with the music; Christopher Tin allowes us to do that with a free download of his albums' digital booklets in his official website (https://www.christophertin.com/); anyway, to make things even easier, and to promote Christopher Tin's works, I created what I'd have liked to find when I just knew Christopher Tin, a Live with Lyrics; in this way, though songs are a little bit different, the vision is surely less demanding. I have inserted lyrics where they were available (the choir in Lux Aeterna is an addition in the Concert, absent in the original, so it has no lyrics), removing silences between songs when they are absent in the album, and maintaining them in the spaces between the three parts of the album, marked by the moving of the sun. I added some gold-texts when I found some melodies which are repeated in more songs; these melodies don't only give unity to the album, but also have some meanings that we are called to discover. The list of this melodies is at the bottom of the description. Hope you'll enjoy :) SONGS LIST: Part I - Day: 00:20 Baba Yetu (Our Father - Swahili) 03:53 Mado Kara Mieru (Through The Window I See - Japanese) 08:51 Dao Zai Fan Ye (The Path is in Returning - Mandarin) 12:28 Se E Pra Vir Que Venha (Whatever Comes, Let it Come - Portuguese) 16:31 Rassemblons-Nous (Let Us Together - French) Part II - Night: 21:02 Lux Aeterna (Eternal Light - Latin) 25:17 Caoineadh (To Cry - Irish) 30:41 Hymn to Trójcy Świętej (Hymn to the Holy Trinity - Polish) Part III - Dawn: 37:27 Hayom Kadosh (Today is Sacred - Hebrew) 39:25 Hamsáfár (Journey Together - Farsi) 42:30 Sukla-Krsne (Light and Darkness - Sanskrit) 44:49 Kia Hora Te Marino (May Peace Be Widespread - Maori) RECURRING MELODIES: Christopher Tin himself "has been meaning to do it for awhile now himself - make a video that connects all the musical motifs and stuff" (his words). So, since we know these motifs have a meaning in the album, I thought to wirte here what we have found so far. Recurring melodies found until now are: - Life Sound: it is at the beginning and at the end of the Album. It is the main signal of the cycle structure, and it is at the beginning of Day (Baba Yetu - 00:15) and at the end of Dawn (Kia Hora Te Marino - 47:59); so this melody should be referred to both parts and to no song in particular. - Ikubaku ka aru: it is a main melody in Mado Kara Mieru, but it appears also in Baba Yetu (02:25) and Hayom Kadosh (38:49), first songs of Day and Dawn. I gave it the name "ikubaku ka aru", since those are the words with that the melody is sung for the first time (05:55), and they mean "how much more is there to live?" - Peace/Journey sound: this melody appairs in Se E Pra Vir Que Venha (14:13) and in Hamsafar (40:51), very joyous songs; i called it this way since peace and journey look to be the main two ways in that happiness appears. The names I gave to this melodies are only interpretations, and their meanings could be different: free to give other meanings and to look for other repeating melodies. Other melodies found after the creation of the video and so not signed by the gold text: - "Flute sound", a main melody in Lux Aeterna (22:02) that appears also in Baba Yetu (02:20) and in Hayom Kadosh (38:33) always a little before the "ikubaku ka aru" melody. [Found by Scott Johnson in comments] - "Music Growing Up", is present both in Mado Kara Mieru (07:21) and Sukla-Krsne (43:10) - "Hamsafar melody", (39:48), is also present in Kia Hora Te Marino (46:06), with so much evidence that I feel stupid for I had not noticed it before .-. - "Rassemblons-Nous melody" (16:40) is also present in Sukla-Krsne (43:39) I also notice a similar structure of Dao Zai Fan Ye and Lux Aeterna (few lyrics, central central plucked string instruments, similar ending) Considering Caoineadh and and Hymn do Trojcy Swietej bound together, every song is so connected to an other.