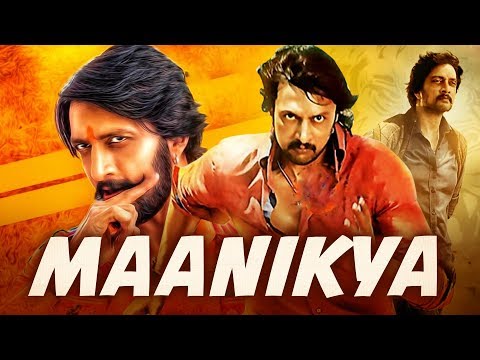 Presenting South (Sauth) Indian Movies Dubbed In Hindi Full Movie 2019 New (New Hindi Action Movie 2019, South Movie 2019) "माणिक्या" Starring Sudeep, V. Ravichandran, Varalaxmi Sarathkumar, Ramya Krishnan, Ranya Rao & P. Ravi Shankar. Exclusively on RKD Filmplex. Subscribe Us For South Blockbusters Movies in Hindi for FREE - http://bit.ly/RKDFilmplex Popular South Movies ⦿ Athirataha : https://youtu.be/jMm6CLXyDOk ⦿ 1 Nenokkadine - https://youtu.be/L6XSa7MvtfI ⦿ GARAM - https://youtu.be/wQW96RC8NW8 ⦿ Upendra Matte Baa - https://youtu.be/TDPupMo0ukY ⦿ Bachchan - https://youtu.be/5IQee_ED_nI ⦿ Aagadu - https://youtu.be/Sy1ygwqRMl0 ⦿ Choodalani Vundi - https://youtu.be/8j3sBzSXVGQ ⦿ Ziddi - https://youtu.be/VwaWwvjTzAc ⦿ Okka Ammayi Thappa - https://youtu.be/59rt15uRQpw ⦿ Simha Hakida Hejje - https://youtu.be/5NhKB_PlNdM ⦿ Vardanayaka - https://youtu.be/MM6rAJhkceQ ⦿ Sukumarudu - https://youtu.be/NL_o9FO8jEc Credits Directed by Sudeep Produced by N. M. Kumar, Priya Sudeep Written by Koratala Siva Starring: Sudeep, V. Ravichandran, Varalaxmi Sarathkumar, Ramya Krishnan, Ranya Rao & P. Ravi Shankar Music by Suraag Cinematography: Jai Anand Edited by Muniraj Production company: Chamundi Cine Creations Synopsis: The movie begins with a girl collecting funds for an organisation in Singapore. A goon gives her money and then chases her at night when she goes home. Then Vijay (Sudeep), enters and resolves the conflict without fighting. The girl introduces herself as Manasa (Ranya Rao). They slowly become friends. But one day she asks Vijay to leave her and go as she cannot stand the separation from him if their relationship develops any further. He then goes back to India and changes the mind of Manasa's brother and when they give a vacation he goes with him to his village. There, where everyone are conservative in nature, he changes their nature and makes them more loveable. When Manasa expresses her love for him, he tells his flashback. It is then revealed that he was born to their rival's family. His father (V. Ravichandran) wanted to convert the people of his village. But his mother Lavanya (Ramya Krishnan) didn't want to stay there, so she left him. Later when Vijay goes there, he falls in love with Sindhu (Varalaxmi Sarathkumar). He starts taking revenge on the Manasa's family without revealing his identity. Then they decide to marry Vijay with Sindhu because they both are in love with each other. During the marriage the Inspector tells his father that the enmity is rekindling because his son is taking revenge on the rivals. Soon afterwards, the rivals come and start killing everyone. After the fight it is known that Vijay's mother dies. His father banishes him and blames her death on him. The story is now back to the present. Manasa's uncle challenges Vijay that if he can defeat his men then he too would follow non violence. After successfully defeating them, her uncle asks Vijay that if he could defeat the rival's son (not knowing that it was Vijay himself) he would marry Manasa to Vijay. Vijay gets angry at his stubbornness and reveals his true identity. He starts fighting with Manasa"s brother. Then all her family members come and change him too. This was watched by his father who had just arrived there. His father welcomes him back to the family. The film ends with him reuniting with Sindhu. Join Us ► YouTube : http://bit.ly/RKDFilmplex ► Facebook : https://www.facebook.com/RKDStudios ► Twitter : https://twitter.com/RKDStudios ► Website : http://www.rkdstudios.com #माणिक्या #SouthMovie2019 #NewHindiMovies